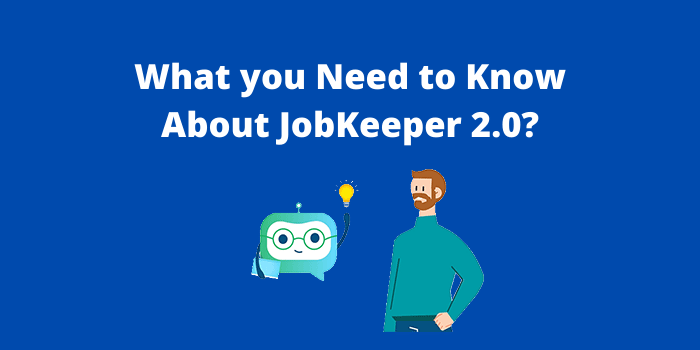 Well, I suppose what lots of small businesses are thinking about right now is JobKeeper 2.0. Are they eligible? What staff are eligible? What do you need to do?

Well, as you know, current JobKeeper finishes on the 27th of September, this month, so in the very near future. And then, Mark II kicks in on the 28th. And you don’t have to reapply, but you do have to continue to put in your business activity statements and you do have to, again, meet the same criterias that you did last time. And that is, for small businesses, a turnover reduction of 30% or more.

Now, what that means and how that’s measured is for the September quarter, that’s July, August, September, your actual GST turnover has to be 30% below what it was for the same quarter last year. And you measure GST turnover on the same basis as you do your activity, your BAS statement.

So, we will now assume you continue to be able to get JobKeeper, what changes from there is there are now two tiers of payment for your staff.

So, those are people who worked more than 80 hours in those four-week periods, they’re on tier one.

Tier one goes from $1,500 to $1,200 on September the 28th. And then there is a second trench, which starts on the 1st of January next year. You will continue to have to show a 30% reduction in turnover. Tier one then goes to a thousand dollars a fortnight.

Now, everybody else, everyone who doesn’t meet the 80 hours in those four-week period end up in the tier two level.

Now tier two, that’s for everyone who doesn’t meet the criteria of tier one, goes from $1,500 a fortnight to $750 a fortnight. And that goes to $650 a fortnight on the 4th of January next year.

Otherwise, they are in tier two. Important things to remember is that you don’t have to reapply, you don’t have to reregister your staff that are already registered, that you’ve already got the permission form in place, but you do need to tell your staff and the ATO, which tier you are determining they should be paid under, based upon the 80-hour test.

So, you need to do that. It’s a proactive issue.

There is, by the way, an alternate test for people who possibly weren’t trading in that quarter last year, you need to go to the ATO website to have a look at the alternate test approach.

But that would be only a very few people, the vast percentage of businesses need to understand that it is an actual turnover test this time not a projected turnover test.

I hope that a large number of Australian businesses now aren’t 30% down, that their businesses are improving and they getting back to profitability. But for those that aren’t, there is continued support. Thanks very much.