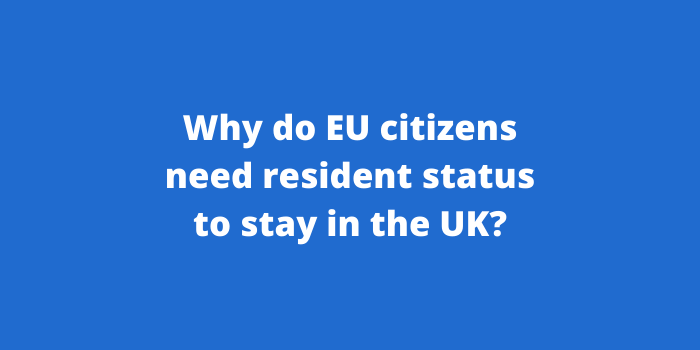 What is the settled status and why do EU citizens need it to stay in the UK?

Settled status, allows those who came to the UK from the EU (those from the Republic of Ireland are excluded), the EEA (European Economic Area which extended the EU´s single market to member states of the European Free Trade Association of Iceland, Liechtenstein and Noway) and Switzerland to continue to live and work without any fear of being questioned.

This scheme is open to those who came to the UK before 31st December 2020. Having settled status is automatically given to anyone who can prove they´ve been in the UK continously for five years or more. For those who´ve not lived in the UK for five years, they can apply for “pre-settled status” allowing them to upgrade subsequently.

What happens if these citizens do not have settled status?

Without this having settled status, any person, including children, are not entitled to enjoy the same rigths to live, work and avail of all entitlements enjoyed by every other UK citizen. This would potentially mean that even those who are fullt entitled to settled status, have they not actually achieved it – there is a backlog over 300,000 applications – could be subject to the sort of confusion we´ve seen in recent weeks.

Though deportations are unlikely, the uncertainty created by not having achieved settled statys by the deadline of 30th June will add to concerns by those affected.

Why has this been introduced, is it a result of Brexit?

The creation of “settled status” is most definitely an outcome of Brexit, Immigration and, in particular, the influx of workers from the EU was believed to be a reason why many voted to leave the EU. Stopping the flow of EU citizens who were allowed freedom of movement within all member states, allowing them to work and enjoy benefits such as access to health and a range of support offered to all citizens, was used as an argument why British people were being disadvantaged and should vote to leave the EU.

The creation of “settled status” was created as a way of enabling those who have been in the uk for at least five years (or who´ve arrived before the end of last year) to achieve resolution that would enable them to continue to do so withput fear of restrictions on them or their families continuing live, study and work in the UK.